While I was making the little tent card on the blog a couple of days ago, the tall flower spikes in the JOFY stamp set reminded me of the blue delphiniums we used to have in the garden and a poem I used to love reading when I was small. I was from the wonderful world of AA Milne, he of  Winne the Pooh  fame and was called 'Now we are Six' .  Its packed full of the most fabulous poems, all of which I loved but this one was always my favourite, so I thought I'd share it all with you. 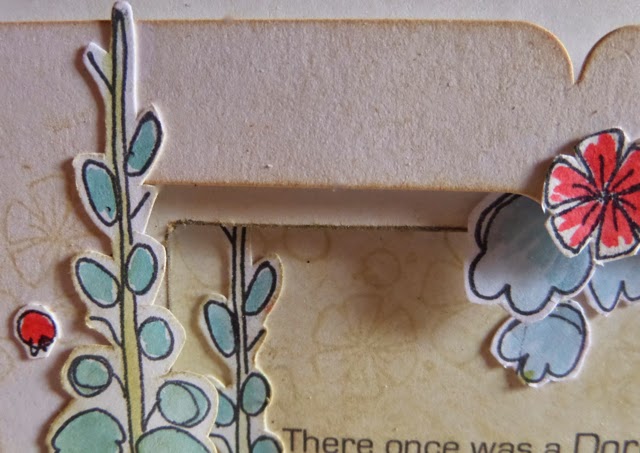 A Doctor came hurrying round, and he said:
"Tut-tut, I am sorry to find you in bed.
Just say 'Ninety-nine' while I look at your chest...
Don't you find that chrysanthemums answer the best?"
The Dormouse looked round at the view and replied
(When he'd said "Ninety-nine") that he'd tried and he'd tried,
And much the most answering things that he knew 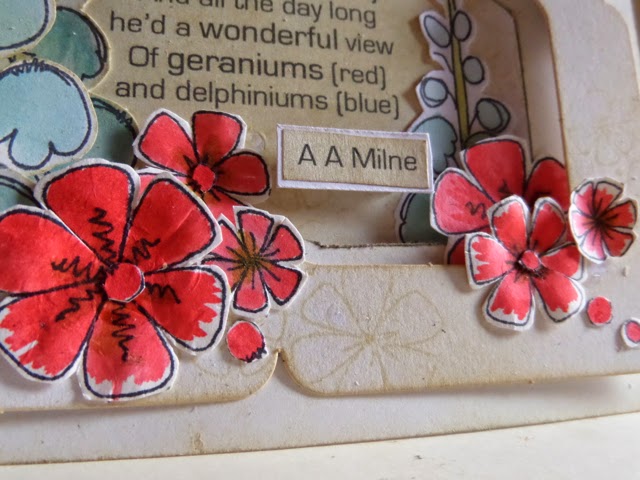 "And now," said the Doctor, "we'll soon
have you right."
The Dormouse looked out, and he said with a sigh:
"I suppose all these people know better than I.
It was silly, perhaps, but I did like the view
Of geraniums (red) and delphiniums (blue)."
The Doctor came round and examined his chest,
And ordered him Nourishment, Tonics, and Rest.
"How very effective," he said, as he shook The thermometer,
"all these chrysanthemums look!"
The Dormouse turned over to shut out the sight
Of the endless chrysanthemums (yellow and white).
"How lovely," he thought, "to be back in a bed
Of delphiniums (blue) and geraniums (red.)" 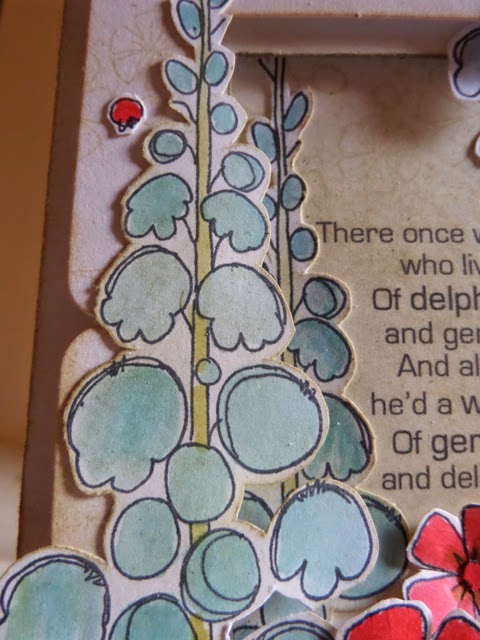 The Doctor said, "Tut! It's another attack!"


And ordered him Milk and Massage-of-the-back
And Freedom-from-worry and Drives-in-a-car,
And murmured, "How sweet your chrysanthemums are!"
The Dormouse lay there with his paws to his eyes,
And imagined himself such a pleasant surprise:
"I'll pretend the chrysanthemums turn to a bed
Of delphiniums (blue) and geraniums (red)!"
The Doctor next morning was rubbing his hands,
And saying, "There's nobody quite understands
These cases as I do! The cure has begun!
How fresh the chrysanthemums look in the sun!"
The Dormouse lay happy, his eyes were so tight
He could see no chrysanthemums, yellow or white.
And all that he felt at the back of his head
Were delphiniums (blue) and geraniums (red).


And that is the reason (Aunt Emily said)
If a Dormouse gets in a chrysanthemum bed,
You will find (so Aunt Emily says) that he lies
Fast asleep on his front with his paws to his eyes

Lovely isn't it .........  I'll share some pics of our workshop day with you tomorrow and some fabulously spooky samples from Lyn too so until then, enjoy your day, thanks for calling by and catch up again soon :-)

Popular posts from this blog

By My Creative Spirit February 22, 2013
IndigoBlu Tags  Happy Friday everyone If your a follower of mine you 'll know that I've been off work for a while following an op, but my life as a lady of leisure came to an end this week when I returned to the world of totally british beautiful fast fast cars and ones that go anywhere!!  I had a wonderful welcome back from my colleagues so thanks to everyone for making my first day as good as it was.  I thought I'd feel like the new girl, not able to remember anything, but just like riding a bike it all came flooding back :-) Now I feel like I've not been away lol!!!    I cant deny I'm not pleased its the weekend and I've got time to re charge my batteries before attempting another 5 days on the trot :-)  As I've just joined the IndigoBlu team official this week I thought I'd share a couple of tags with you made with stamps from the  Pomp and Pageantry and Grand Tour 1 plates and the ledger background which I really love.  Tag 1 IndigoBlu
14 comments
Read more

By My Creative Spirit August 02, 2019
Hi everyone, it's Friday and launch day for our latest project - the File Folder.  I had loads of fun making the samples altered here in two gorgeous paper collections to give two totally different looks to the same File Folder Cover Set.  .   Measuring 10" x 7 1/4 x 2" the sturdy File Folder Cover set is laser cut from 3mm MDF, has a magnetic closure inset into the covers, opens top reveal the option to add a noticeboard section on the inside cover and a ring binder that holds four layered pages. These can be made with or without pockets and pull out photo mats.  I've added a tuck spot option for the pages too. These allow you to slot pictures onto the pages without sticking them down. That way you can always see the beautiful papers you've chosen to decorate your pages in, like  like the Mad Hatter below.  I added black clips into the samples too to hold more pics and ephemera on the pages.   and right in the centre there's an acetate waterfall se
2 comments
Read more